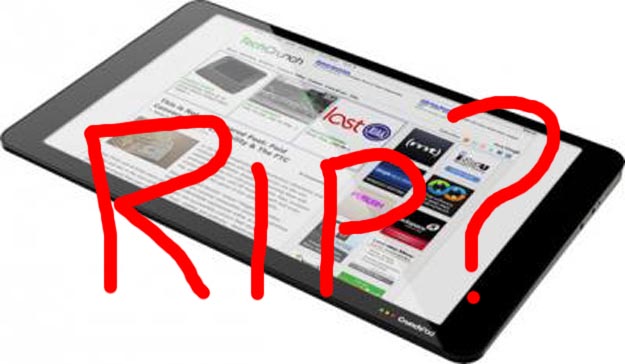 By now, many of us have heard of Michael Arrington of TechCrunch. Many of us are already familiar with his website, but perhaps more importantly, we’ve come to know a thing or two about his CrunchPad project. The idea is that he wanted to make a functional tablet at a more affordable price. Well, it seems that project could be dead.

Dead might not be the right word. Instead, there are reports coming out of California that the CrunchPad project is being delayed indefinitely due to increasing expenses. Arrington said very early on that he wanted to make this product as inexpensive as possible.

Arrington’s CrunchPad project sounded a lot like the One Laptop Per Child (OLPC) project in that it was meant to be cheap. Back in July 2008, Michael Arrington pointed toward a $200 target. More recently, Arrington said that it would probably be closer to $300.

Now the latest reports say that the costs are going to push the final retail price of the CrunchPad into the $600 or $700 range, no longer making it a feasible commercial venture. After all, there are plenty of rumors swirling about an Apple Tablet that is less than $1,000.

So, no more CrunchPad? Until Arrington and his team are able to cut costs significantly, I wouldn’t hold my breath.