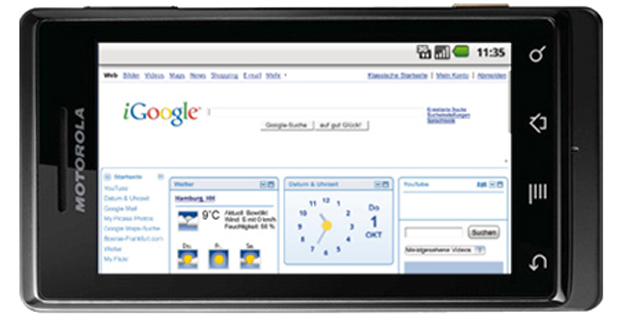 The phone that we once knew as the Sholes and the Tao is finally growing up. We already know that Verizon Wireless will be getting the Motorola DROID to launch its line of Google Android smartphones, but what about our friends over in Europe? Well, they’re getting a version of the DROID as well and it’s going to be called the Motorola MILESTONE.

Are the two phones identical? Not exactly. Naturally, the biggest difference will be the swap from Verizon’s CDMA to a Europe-friendly GSM radio. The Motorola MILESTONE will still get the Google Android platform too, of course, but the MILESTONE gets a multitouch display to boot. For the record, the Motorola DROID doesn’t do multitouch.

There is a tradeoff involved. While the Motorola DROID will happily guide you around town with Google Maps Navigator and the whole turn-by-turn GPS thing, the Motorola MILESTONE will not. In its place, Europeans get their directions from MOTONVAV.

The Motorola MILESTONE is currently slated with a release through Italy and Germany first. Look for it on November 9th through The Phone House, O2, and Vodafone.