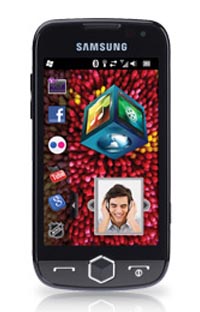 There are all sorts of official this and official that for the upcoming 2010 Winter Olympic Games. Well, it’s time to add another one to the list, because Bell Mobility has announced that the Samsung OMNIA II will be the official mobile device of the Vancouver 2010 Olympic Winter Games.

We already knew that Bell would be picking up this smartphone next week, but we figured it would just be another phone in the lineup. Well, it’s graduating to a slightly elevated status as the official phone of the Olympics. I’m guessing that Bell will be supplying some VANOC and other officials with the device.

If you decide to buy the Samsung OMNIA II from Bell, they will provide you witha free download from Samsung called Wireless Olympic Works (WOW). This is designed to give you real-time information regarding the 2010 Olympics as it happens. Or, you know, you could visit any number of news sites.