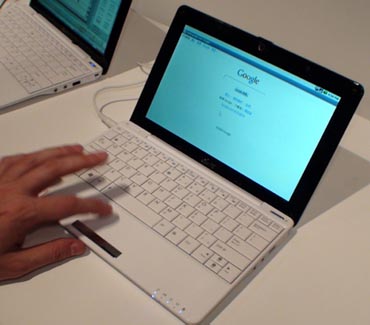 Get ready to add another term to your ever-expanding lexicon of mobile devices. We started with cell phones and then we learned about having smartphones to do more. We started with laptops and notebooks, but then we were introduced to the smaller form factor of netbooks. Let’s not forget about UMPCs and MIDs too. And soon, we will get bombarded with smartbooks.

What are smartbooks exactly? Well, that’s the term was coined to refer to a new family of mobile devices that may look like netbooks but have smartphone-like guts. That’s because the new line of Asus Eee PC units will be powered by a 1GHz Snapdragon processor and Android operating system.

In this way, you get a netbook-like experience with its form factor, but you get a smartphone-like experience with the choice of processor and operating system. The kicker to the Asus “secret weapon” is that it should be priced at about $180. That’s cheaper than most new smartphones and netbooks. Asus is saying that its first smartbook should be ready “early next year.”

From what I can gather, the “smartbook” naming scheme comes by way of Qualcomm, referring to any netbooks that use their ARM-based processors. They used to say that these processors were necessary for Android, but Acer managed to port it over to their Atom-powered Aspire One.