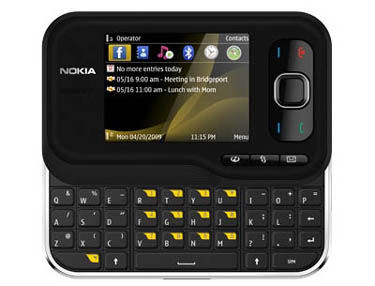 If you’re a fan of phones like the LG Rumor and Samsung Gravity, but you find yourself wanting something with more of a Finnish flair, it seems that Rogers Wireless has just the ticket for you. Offering a smartphone-like experience at a more affordable price is the newly announced Nokia Surge 6790.

This announcement didn’t exactly come out of left field, but it’s good to see an official unveiling of this handy little phone. In its closed position, you get the regular call and end keys, as well as the five-way navigator. However, it’s when you slide it open on its side that you get to see the Surge’s true prowess.

The placement of the screen makes a lot more sense in landscape position, since it is centered on the device as shown. You get the full QWERTY keyboard, the quick access buttons to the right, and the yellow highlights are for digits if you need them.

In terms of other features, you get a 2 megapixel camera, GPS, microSD expansion, the 2.4-inch QVGA display, and a slick black design scheme. Expect the Nokia Surge 6790 to sell for just $29.99 with a qualifying three-year contract.