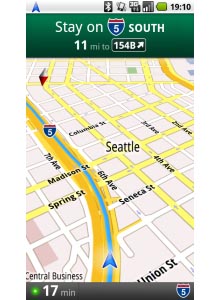 Ever since I picked up my Nokia E71 and loaded it with the Google Maps application, I haven’t used my standalone Garmin GPS navigation device. The regular mobile Google Maps app can give directions, but it doesn’t do turn-by-turn. Well, that’s changing with Google Maps Navigation. And, like its predecessors, it’s free too.

The new turn-by-turn GPS navigation application is set to make its debut with the new Google Android 2.0 platform. Google Maps Navigation is fully integrated into Google Maps, so you get everything that you had before, plus turn-by-turn directions and more.

Other features include voice search, keyword search, satellite view, traffic view, and even street view. You also get the “layers” that were recently introduced in Google Maps, overlaying with information for parking, gas stations, and so on.

For now, the application will only be made for Android 2.0, but I wouldn’t be at all surprised if a version of Google Maps Navigation eventually gets released for iPhone, BlackBerry, and Symbian too.

Not surprisingly, the stocks of conventional GPS companies like TomTom and Garmin tanked on the news. Check out the video below for a look at the beta build of Google Maps Navigation. Looks pretty slick, wouldn’t you say?