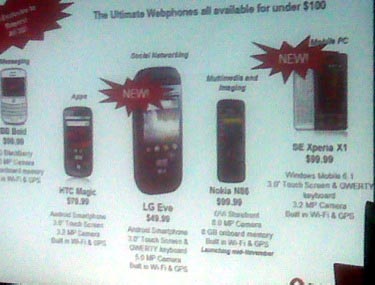 Rogers has been able to enjoy quite the healthy GSM monopoly in Canada for a number of years, but some heavy competition is just around the corner. Naturally, the suits at Rogers need to come up with sommething to respond to these new entrants and they’re doing it with “webphones” priced at under $100 each. At least, that’s how it seems.

Both Telus and Bell are going to be launching their HSPA networks very shortly and they’ve got quite a few fantastic handsets lined up for the launch, including the Bold 9700 and the iPhone 3GS. Let’s not forget about Dave Wireless and Wind Mobile too. Well, Rogers is fighting back with some more affordable options.

Some of these are new, some of them are not, but they’re all web-happy cell phones that will cost you less than $100 on a three-year contract. The smartphones “Webphones” are some pretty heavy hitters too.

The cheapest of the bunch is the LG Eve. Featuring a 3-inch touchscreen, a 5-megapixel camera, Google Android, GPS, and Wi-Fi, this phone is $49.99 on contract.