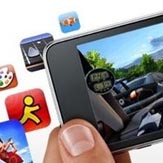 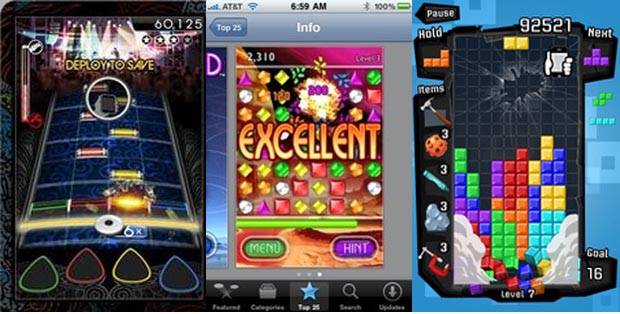 Yes, the iPhone has “phone” in its name, but many iPhone users would much rather use their treasured handset for the purposes of surfing the web and enjoying the array of games avaialble through the official App Store. So, what kind of games are topping the charts these days? Given its relative success on consoles, it really shouldn’t come as much of a surprise that Rock Band tops the list this week.

This is the first week for Rock Band ($9.99) in the App Store and it soared to top the charts right away. The popular rhythm game tackles all four of the instruments from its console counterpart, letting you tap-tap away at a virtual guitar, bass, drums, and even vocals, though the “singing” isn’t really karaoke.

Bejeweled 2 ($2.99) from PopCap Games takes the second spot, reminding us that we still like swapping gems to make matching rows and columns. It’s been in the top ten for nine weeks now. Third place goes to Tetris ($4.99), which has been on the list for seven weeks.

Interestingly, Rock Band isn’t the only rhythm game to make the cut. Tap Tap Revenge 3 ($0.99) from Tapulous managed to secure the sixth slot, possibly because of its lower price point. Other highlights from this week’s top ten include Madden, Need for Speed, Sims, Skee-Ball, Scrabble, and Monopoly.