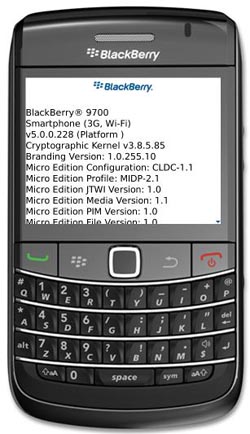 The BlackBerry Bold 9700, previously known by its Onyx codename, isn’t set for an official release with any wireless carrier until some time next month, but that doesn’t mean that you can’t get your hands on one right now. Well, sort of.

The people at Research in Motion want to give you an idea of what it will be like to own the second-generation BlackBerry Bold, so why wouldn’t you check it out?

Well, for starters, the “checking it out” part is only on a virtual level. They’re not giving you a free piece of hardware to bandy around town. Instead, you can find that the BlackBerry Bold 9700 simulator up and running over at the official BlackBerry Developer site.

This gives you full control over a virtual handset, fiddling around with its various features and functions. This isn’t quite the same thing as having the physical hardware in your hands, but this is as close as you’re going to get before the phone actually launches.

You can download the BlackBerry Bold 9700 simulator from BlackBerry.com and do any developing or fiddling that you’d like in the meantime.