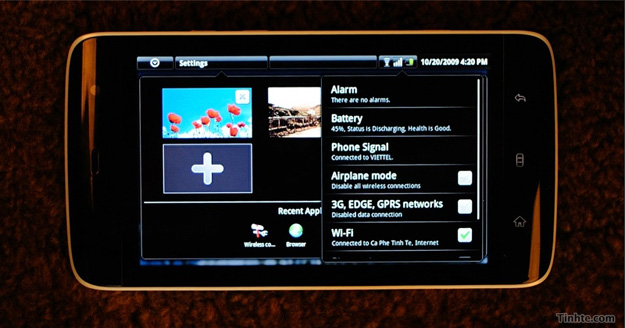 You know that Dell Mini 3i smartphone that’s making its rounds in and around China? You know how it comes powered by Google Android? Well, the smartphone isn’t the only place where Dell plans on doing an Android thing, because here is our first look at an Android-based mobile Internet device (MID) from Dell.

Dubbed the Dell Streak, this is a prototype handheld that will indeed be powered by Google Android and will offer a streamlined web-browsing experience. This is in line with earlier reports from the Wall Street Journal saying that Dell was working on an Android MID.

The photo comes by way of a Vietnamese mobile site, so we may have to take the report with a grain or two of salt, but this sounds like a very real possibility overall. It is interesting that the first look would come from Vietnam of all places, but stranger things have happened.

And the specs? The Dell Streak is said to get Android 2.0, a 5-inch WVGA multitouch capacitive display, 3G and Wi-Fi for wireless connectivity, a 5 megapixel camera with dual-LED flash, Bluetooth, microSD, and a 1300mAh battery. That might be a front-facing camera too, though it could be an ambient light sensor.

Peep the vid for a better look at the device. Are MIDs back on the rise?