The Plustek MobileOffice D28 is one of the newest portable scanners to come out of the Plustek camp and it comes with a number of nifty features that are suitable for cramped cubicles and mobile executives. 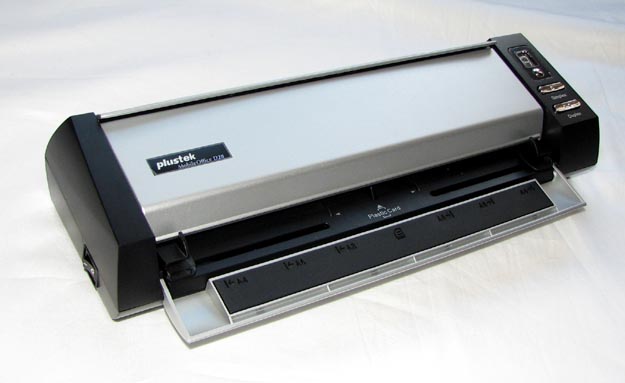 Even though many of us have moved on to a largely digital experience, physical pieces of paper (including business cards) are still in heavy use. We still need scanners and the MobileOffice D28 seems to suit the job.

Designed to be a compact solution at less than 4-inches by 12-inches, the MobileOffice D28 still doesn’t come up short in the features department. The effective resolution may only be 600dpi, but that should be suitable for the vast majority of business documents and the like. 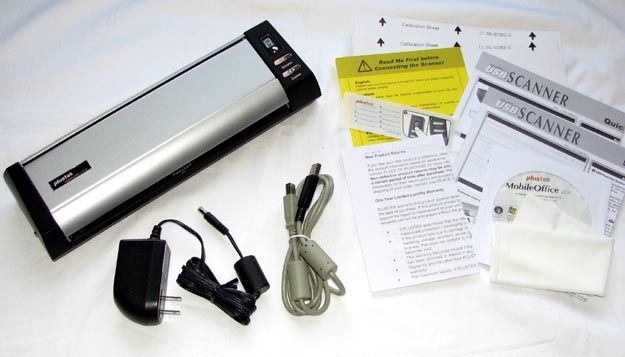 Inside the box, you get the scanner itself, the power cable, a USB cable, supporting documentation, cleaning cloth, calibration sheets, and installation CD. For the sake of portability, I would have liked to see this Plustek scanner have the option of powering from a USB connection alone, but you do require a wall outlet for its operation.

Some people don’t have giant desks in the middle of corner offices. Some of us deal with smaller desks that we’d like, so we need to have electronics that suit these smaller dimensions. In addition to its small size, the Plustek MobileOffice D28 comes with one other major advantage.

The paper feeds in from the front after you flip down the front flap, but you have a choice how your paper feeds out of the back. The sheets can feed through horizontally like how you’d expect them, but you can also adjust the back portion so that the paper rotates 90-degrees and is sent out vertically. 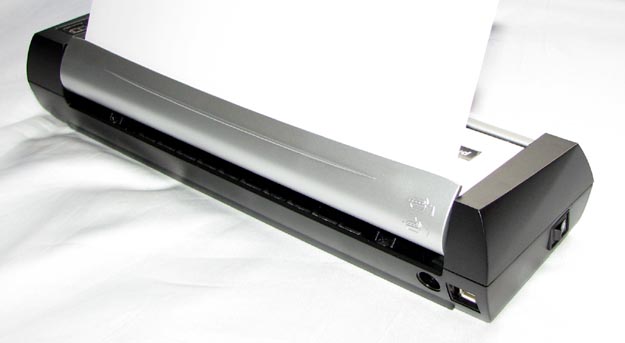 This way, you can have the scanner placed almost right up to the wall, pushed out of the way. This works for regular letter and legal documents. The Plustek D28 will also handle business cards, plastic cards (like credit cards), payment cheques, and more.

The build quality appears to be up to par for the course. It seems that Plustek may have used a slightly cheaper plastic than I would have liked and there is some “give” at the seams, but I don’t have any concerns about it falling apart in any way.

One of the smaller features that I liked on this scanner is that it “grabbed” the sheet of paper when I fed it in through the front. It would pull in the sheet just a smidge, holding it place so that it could be ready for scanning. This way, you don’t have to hold it in place before hitting the scan button.

Setting Up to Nine Preset Scans

Looking at the simple on-device user interface, you see three buttons. One is for simplex (one-sided) scanning, another for duplex (two-sided), and a third that cycles through a series of numbers. If this were a copier, you’d assume that this was for the number of copies.

These numbers are not for that purpose, however. Instead, they correspond to up to nine preset configurations that you can define within the provided software. You might have one preset to work with OCR, another to feed out black-and-white PDF files, and so on.

The OCR seems to work very well and, in its basic form, will output a simple text file. Using the software, you can set up grayscale/color, simplex/duplex, and other options. Thankfully, a small sticker is provided to help you remember which setting is for what purpose.

Don’t let its relatively diminutive stature confuse you. The Plustek Mobile Office D28 is just as powerful a scanner as its larger and more expensive counterparts. The OCR works beautifully and I like the ability to define up to nine different setting schemes that are quickly accessed without fumbling through a menu each time.

The compact size is a definite plus and having the ability to have the forms feed out vertically helps to save even more space. The build quality still leaves something to be desired and the price (about $300) may scare off some people who are more accustomed to $100 all-in-ones, but the software really makes this is a strong outing for Plustek. 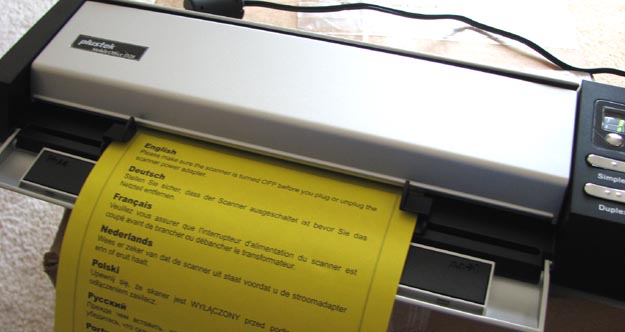