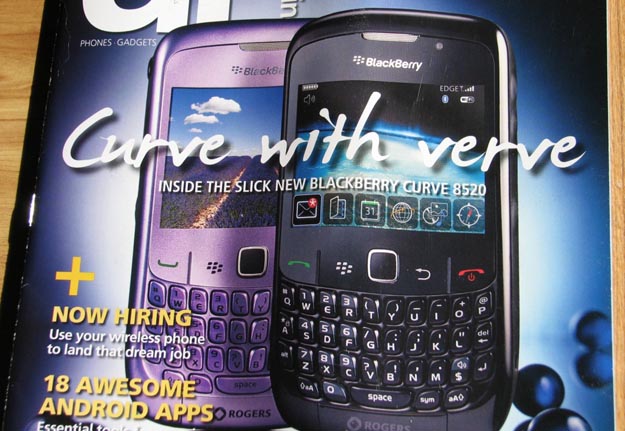 Even though Research in Motion has made some rather major strides in the consumer market, the BlackBerry line of devices is still very much catering to the corporate environment. For the executive type, a nondescript black smartphone will do just fine, but what about people who want a little more personality and color?

The BlackBerry Curve 8520 recently launched through Rogers Wireless, but it seems that they’re already gearing up for an alternative option. Beyond the regular black faceplate that will appeal to the more conservative user, it seems that Rogers wants to launch a lavender version of the Curve 8520.

We were offered an unofficial and brief glimpse at this new paint job some time back, but the shot here is taken from the official UR magazine from Rogers. This is about as official a confirmation as we’re going to get short of a full press release announcing the purple handset.

Based on what we can see here, the best guess would have the lavender BlackBerry Curve 8520 being released some time “soon,” whatever that means. Seeing how the price on the classic black model has already dropped to $49.99, a new color option can’t be far behind.