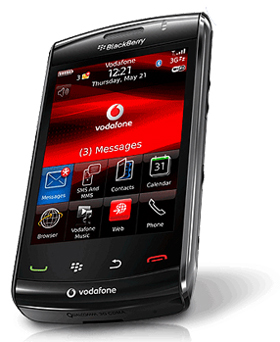 It’s no secret that I wasn’t exactly the biggest of fans of the first BlackBerry Storm. It was a valiant effort on the part of Research in Motion, but it was still far from polished and it had its fair share of problems. Will the BlackBerry Storm2 address these concerns? Well, Vodafone’s about to find out.

From what we understand, Vodafone UK will have the exclusive rights to the BlackBerry Storm2 over in England. However, unlike the iPhone agreement with AT&T over here, the exclusivity will be very short-lived.

The Storm2 is set to launch around October 26th, but the Vodafone exclusivity will only last for “a few weeks.” That’s not particularly specific, but it does mean that the Storm2 will only be a Vodafone-only product for a relatively short amount of time. This opens the door for O2, Orange, and T-Mobile to get touchy with a new Storm too.

These other UK carriers have not come forward with any official plans to bring the BlackBerry Storm2 into their respective folds, but there’s word going around that Orange will nab it in time for the Christmas shopping season. Is a price war in the works? Maybe.