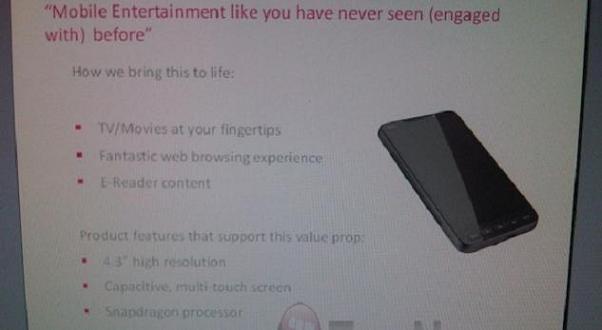 T-Mobile USA has always been more than happy to accept a wide range of HTC smartphones, including both those that are powered by Google Android and by Windows Mobile. Well, we could be on the cusp of getting one of the best Windows Mobile HTC smartphones to date, since this leaked slide is pointing toward a pending launch of the HTC HD2.

Previously known as the HTC Leo, the HTC Touch HD2 features a giant 4.3-inch WVGA display, but the real kicker is that this is a capacitive touchscreen and not a resistive one. This makes it a lot more finger-friendly, bringing it up to par with the Apple iPhone.

You might also remember that the HTC HD2 gets a 1GHz Snapdragon processor, Windows Mobile 6.5, 5-megapixel camera with dual-LED flash, GPS, Wi-Fi, FM radio, digital compass, 3.5mm headphone jack, TouchFLO 3D, and a microSD slot. This is one powerhouse of a phone.

Bear in mind that this is little more than a leaked slide at this point, but it looks pretty legitimate. The European launch of the HD2 is set for November 11, so here’s hoping that the American launch will follow shortly afterward.