The thumbnail-sized microSD card always strikes me as a recipe for lost data. A breeze, a bump on the train, a fumble when loading could all result in that micro flash card disappearing forever.

So when I got the ABBA Gold player pack from SanDisk (or should I say Sansa), I was worried that if I ever tried to remove the card I’d end up tuneless.

But I soldiered on and unwrapped the package. Inside the bundle – for $35 – came the player, some headphones, a microSD case, a microSD USB adapter (w00t!), the microSD with ABBA Gold on it, and an AA battery. 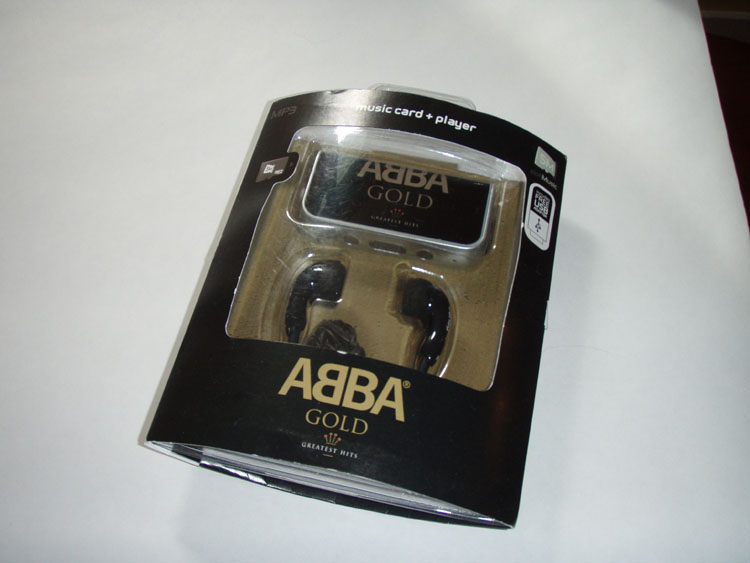 As I am prone to do, I immediately pressed and prodded the player – just longer than a AA battery and about the size of a fat lighter – and nothing happened. I pushed on the card and it popped out easily. I pulled on the case, still no music. So I resorted to the directions. 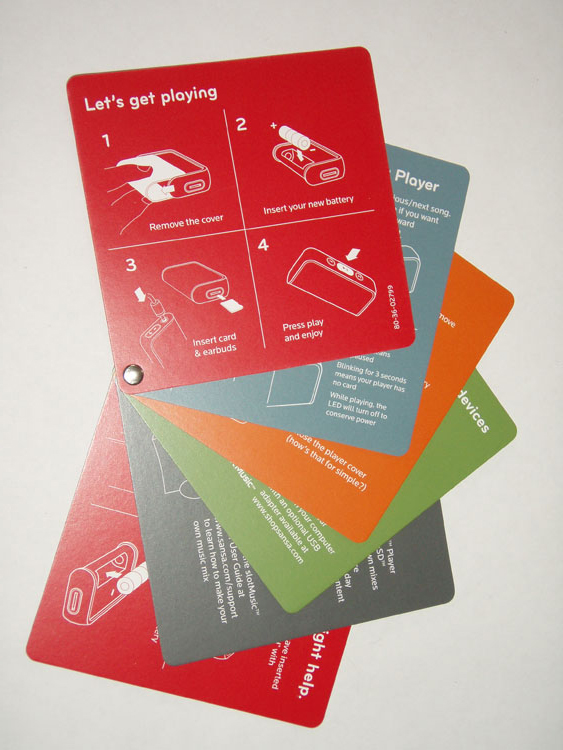 These told me I had to install the battery. Funny, because most things I build or assemble end up with extra parts so I didn’t think anything was wrong when the AA battery was rolling around my lap.

The cover was a little difficult to slide off, but once I had installed the battery, the music flowed with ease.

Now you realize that microSD cards are the vehicle of choice for moving data to and from myriad cell phones. You might not realize that they’re also perfect for backing up data on your computer. I’m taking this tangent because with the USB adapter Sansa included, I now have a way to back up music, photos, documents on a container that fits in the coin pocket of my jeans. 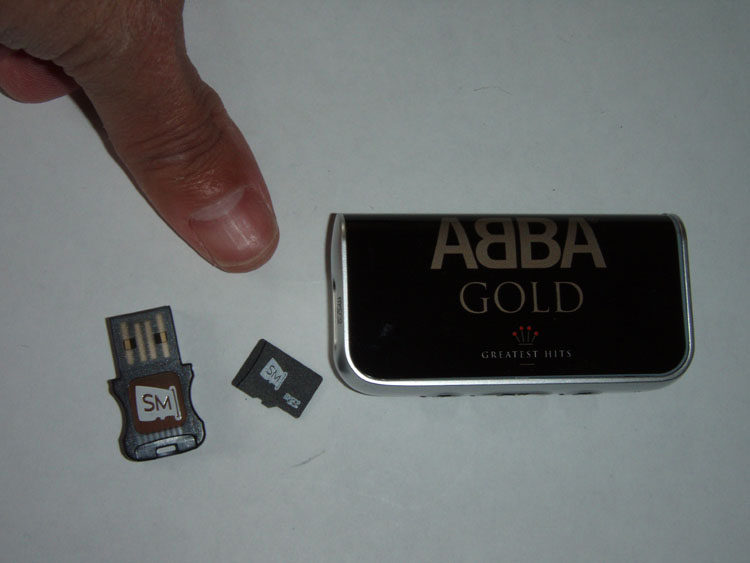 That’s a huge win. In fact, during the 2009 CES in Las Vegas, SanDisk was handing out 16GB microSD cards and USB adapters. I’ve used that device probably more than I use my desktop or even pocket back-up drives. On vacation it becomes a perfect spot to back up photos – so if I lose my camera and my laptop I’m still protected. The only way I’m up a creek is if I lose my pants…but then I suspect I might have other issues to worry about.

Enough digressing, what did I like or despise about the Sansa Bundle?

The instructions are fun and pretty clear. Printed on colored little squares of paper, they walk you visually through inserting the battery and getting the player going. *Without these instructions I might still be monkeying with the buttons on the player in silence.

The headphones are just a step above airline quality earbuds. They deliver sound, but it’s not like listening to top-end audio. The faux gold connector at the end might make you think they’re better than base level, but I don’t think they are.

USB adapter. JUST A MAJOR WIN. Love that this was included. It’s an added bonus that I didn’t anticipate.

Player thoughts. The player fits in a pocket easily. Operation is above average, although you have to repeatedly hit buttons to get a response. For instance, to increase or decrease volume you need to press, press, press. I’d rather have a control that climbs when you keep the button pressed. Music navigation is easy – forward and back. And accessing the card and battery are simple too. 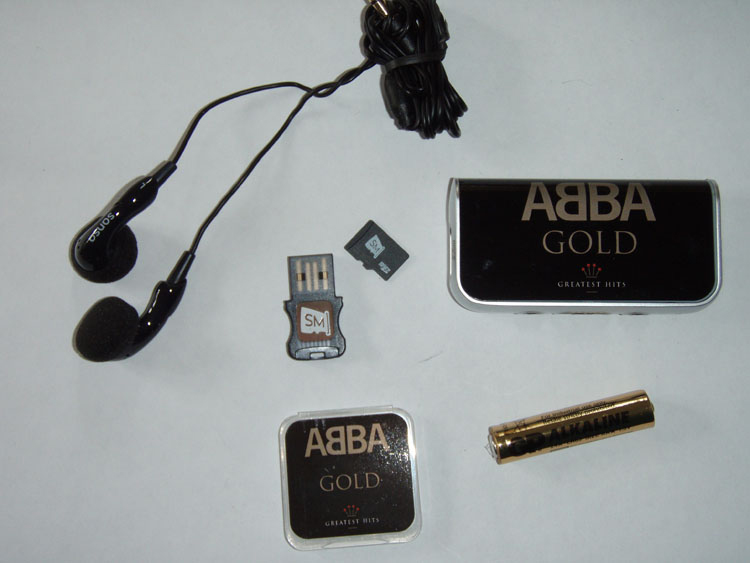 Sansa is offering a slew of music packages in a line called slotMusic. This collection is just an overpackaged microSD card with a full album on it. You take that card, pop it into your phone or Sansa player and you’re ready to go. Albums cost about the same as a CD, but are already more versatile than a disc.

Overall, I’m not sure I’d jump at a $35 player and album package for myself. It makes a neat gift for someone who isn’t too far along the technology spectrum – but if you’ve already got an MP3 player, this isn’t for you. 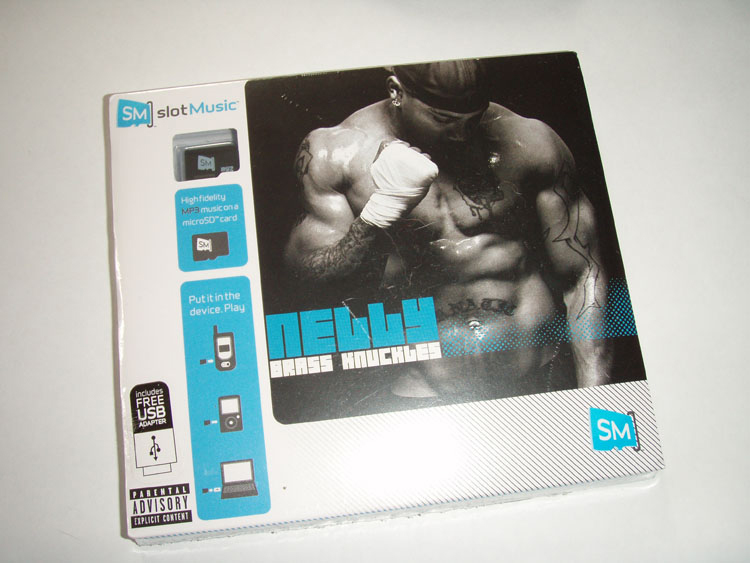 You’re better off getting slotMusic or even buying tracks separately and then loading them onto your existing player. Another option is to get one of Sansa’s other players – they offer a little more versatility and some even receive radio signals.

Still raving about the USB adapter though.

Sansa Player and slotMusic make the cut, but only for those who don’t already have a better option.