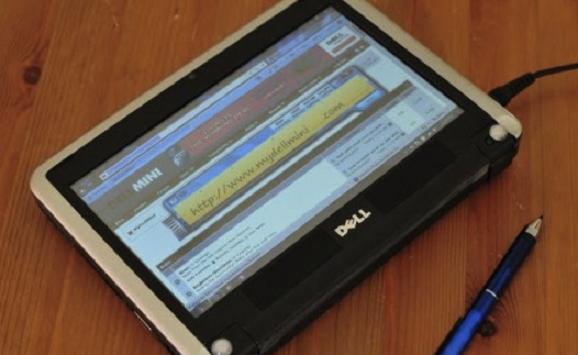 Gigabyte has its netbook-sized tablet PC, but the build quality leaves much to be desired and the price point isn’t exactly in the ideal range. So, what can you do if you want to have the tablet experience in a netbook-sized package? You do it yourself, of course, as evidenced by this modified Dell Mini 9.

We already know that the Dell Mini 9 is a great candidate for the Hackintosh mod, getting loaded up with a build of Mac OS X to pose around as a Mac netbook, but it’s even more versatile than that. Rob from MyDellMini took his Dell Vostro A90 (the business version of the Mini 9) and turned it into a fully functional tablet PC.

There are (at least) three major modifications involved. First, Rob installed a touchscreen layer so that the netbook can accept fingernail and stylus-based input. Second, he flipped the display so that you can do the convertible tablet thing. And third, he relocated the power button so that it would be accessible in tablet mode.

With a few other minor alterations, Rob is now the proud owner of a Dell Vostro A90 with Windows 7, a touchscreen slate configuration, 16GB SSD, WiFi, Bluetooth, 1GB of RAM, and Intel Atom processor. He also plans on installing an accelerometer in the near future.

For more pics and such, check out Rob928’s forum post on MyDellMini.com.