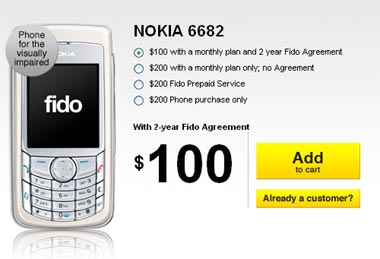 You know that legislation that was passed requiring wireless carriers in Canada to provide at least one phone in their lineup that is well-suited for the visually impaired? Whereas big brother Rogers gets the Nokia E71 for this purpose, it seems that the poor visually-impaired dog is getting something much, much older.

To satisfy the requirements laid out by the government, Fido has decided to launch the “all new” Nokia 6682. Does this phone look familiar to you? It should, because the Nokia 6682 was initially released way back in 2005 and has since been discontinued. I guess Fido found some old stock, because it is back.

Just like the modified Nokia E71 for Rogers, the Nokia 6682 for Fido will come preloaded with TALKS, an application that changes text messages and other on-screen content into speech. This is supposed to help people who have trouble seeing.