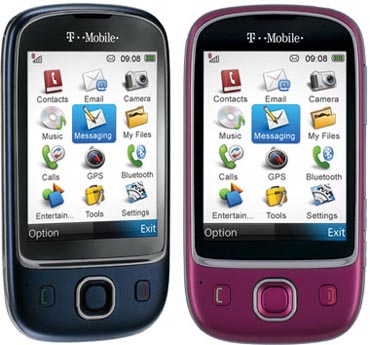 Around the same time that the first Apple iPhone hit the scene, we were also treated to the HTC Touch. Powered by Windows Mobile, it looked like a viable alternative to the handset coming out of Cupertino, but it ultimately ended up playing second or even third fiddle. Well, it seems like it’s back again.

I don’t see any official confirmation one way or the other, but I’d say that the “new” T-Mobile Tap looks a heck of a lot like the original HTC Touch. You get a very similar touchscreen display and the hardware-based buttons underneath look very similar as well.

It’s possible that this is truly a new phone, more or less, since I do not think that this phone is running on Windows Mobile 5. Instead, it seems to be loaded with a regular “dumbphone” or “feature phone” operating system instead.

Specs include a 2-megapixel camera, Bluetooth, web browser, media player, GPS, and that large touchscreen. The T-Mobile Tap will be made available in berry and midnight blue in time for the holiday shopping season.