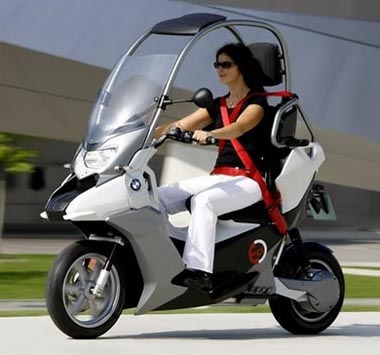 A friend of mine enjoys zipping around town on his scooter in the summer, but he’s not exactly a fan of throwing on the rain gear when the weather starts to get less friendly in the fall. Well, he would have less of an issue, maybe, if he were to consider this electric scooter from BMW.

The original BMW C1 was released in 2000, only to be scrapped a couple of years later. Well, a new version called the BMW C1-E is apparently in the works and comes with a couple of very notable upgrades. For starters, it has that roof that’ll go above your head. From what I can see, this doesn’t completely protect you from the elements, but a little ingenuity might fix that.

Strangely, I see that it seems to have a seatbelt as well, but I’m not sure if that would be such a great idea. If your scooter is heading into a brick wall, wouldn’t you be better off bailing? I’ll leave that up to the safety engineers to determine. The rider should still be wearing a helmet either way, no?

You’ll also notice that this model has an “E” attached to the end of it. That’s because this is a full-electric scooter with zero emissions. Power comes by way of a 125V plug-in lithium-ion battery. The 27hp output is enough to do 0-80km/h in seven seconds before topping out at 100km/h.