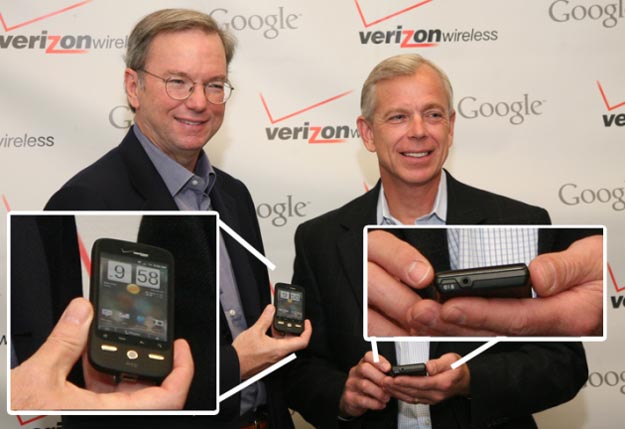 Stories like this usually come by way of rogue employees or leaked ninja shots, but we’ve got ourselves an official photo with the CEOs of Google and Verizon standing next to eachother. Big deal, right? Well, as you can quite plainly see, that’s an HTC Hero in that shot, a phone that many say is the best Android device to date.

We already knew that a chin-free version of the HTC Hero is being destined for Sprint, but we weren’t entirely sure what was happening over at Big Red. We knew that Verizon and Google were getting together to bring Android to “the network”, but this is a pretty big leak!

In this picture, we see Eric Schmidt of Google and Lowell McAdam of Verizon and both of them are holding Android devices. The HTC Hero looks clear enough on the left, taking on the same chin-free variation as Sprint, but I’m thinking that phone on the right is some variant of the Motorola Sholes, Tao, or Droid.

We thought that the Android Revolution was already well underway, but now that so many other carriers and handset manufacturers are jumping into the arena, we could be seeing a whole lot more Google in our cell phone selection in the very near fture. Look out, iPhone?