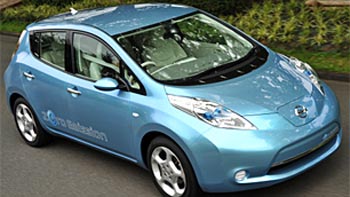 It may look like any other hybrid on the block, perhaps even evoking images of the iconic Toyota Prius, but the Nissan Leaf is something different entirely. Rather than working with both gasoline and electricity, the Nissan Leaf is fully an electric car and it’ll be ready for the people of BC in under two years.

Nissan announced earlier today that the Canadian launch of the Nissan Leaf electric vehicle will start out in British Columbia and eventually expand from there. Even though the car is fully electric, the Leaf is said to provide performance equivalent to a V6 family car.

You won’t be able to beat the GT-R in any kind of race, but the Nissan Leaf isn’t exactly anything to sneeze at either. In fact, the Leaf represents one of the first all-electric vehicles capable of reaching highway speeds. It tops out at 140 km/h, which is higher than any speed limit (as far as I know) in BC.

British Columbia won’t have first dibs on the Leaf, since it’ll launch in other international markets in 2010, but it’ll be the first to have it in Canada. Nissan has worked with the City of Vancouver and BC Hydro to provide charging facilities for the Leaf and other EVs like it.

The plug-in charging stations are planned for at least 20% of parking stalls in new condo developments and apartment buildings, as well as some city-owned parking lots.