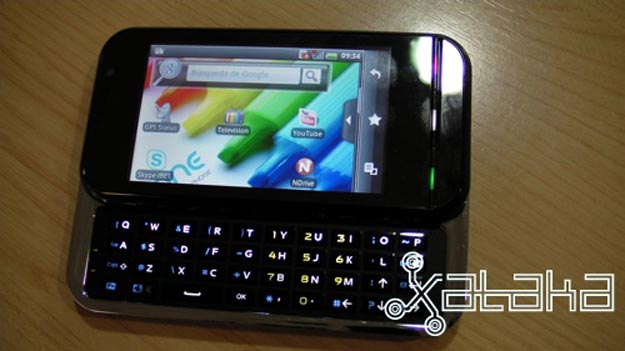 It may have started with a single handset from HTC, but it seems that the Android revolution is finally coming to fruition with handsets expected from the likes of Motorola and Samsung, among others. Another name has joined the fray and it’s not one that we were expecting. May I present the GeeksPhone One.

GeeksPhone is a Spanish start-up and it may have one of the most appropriate company names that we have seen in some time. This phone really does look like it’s going to cater to the geeks in the audience and the “One” model name is fitting, since this is GeeksPhone’s first phone.

Loading up with Google Android as its operating system, the GeeksPhone One looks like it gets a 3.2-inch WQVGA hybrid resistive touchscreen display, a slide-out QWERTY keyboard, a 3.1-megapixel autofocus camera, a VGA front-facing camera, 3.5mm headset jack, integrated 802.11/b/g Wi-Fi, GPS, accelerometer, and a 528MHz ARM11 Jazelle processor.

The specs aren’t exactly a quantum leap above what we are hearing from other comapnies and the form factor isn’t terribly original either, but it’s good to see that we may soon have yet another Android option on our hands. Since they’re “just” a startup, here’s hoping that GeeksPhone prices the One competitively.