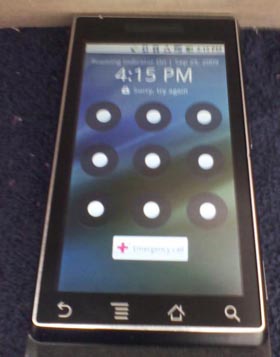 Verizon will soon be joining the Google Android party courtesy of Motorola and it seems that they are going to go with the most appropriate name of all for an Android phone. The rumblings are pointing toward the pending release of the Motorola Droid through Verizon Wireless, but this is not an entirely new phone for Big Red.

Upon closer inspection, you’ll find that this leaked picture of the Motorola Droid bears a striking resemblance to the Motorola Sholes smartphone that we’ve seen leaked elsewhere. More recently, the phone has been called the Motorola Tao, but it appears to be the same handset.

If the rumors are to be believed, the Motorola Droid for Verizon will get Google Android at its core, of course, but it will not have the MOTOBLUR user interface just yet. It’ll also be the first Google Experience phone with built-in native support for Adobe Flash.

Other highlights include a 3.7-inch capacitive touchscreen display with a resolution of 854×480 pixels, a 5 megapixel camera, ARM Cortex 500MHz processor, QWERTY keyboard, facial recognition software, a custom Motorola UI that is neither MOTOBLUR nor Verizon, and your choice of black or titanium.

There’s word that a version without the slide-out keyboard is being planned for release some time in 2010 too. I wonder if that version will get MOTOBLUR instead.