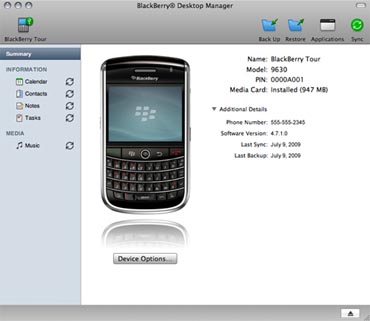 For the most part, Apple products can play friendly in a Windows environment, since you can launch iTunes in your Vista computer and load up that iPhone or iPod as necessary. The reverse hasn’t exactly been true for BlackBerry devices up until now, but that’s finally changing this Friday.

The good people in Waterloo have officially confirmed that the BlackBerry Desktop Manager for Mac will be released this Friday, October 2. Just because you’re rocking a MacBook doesn’t mean that you can’t take the path of the BlackBerry Storm instead of the iPhone.

This means that you no longer have to use VMWare or Parallels to get your BlackBerry connected to your Mac, since Research in Motion is finally recognizing that plenty of BlackBerry users prefer using an Apple computer over one powered by Microsoft’s Windows.

As far as we can tell, the BlackBerry Desktop Manager for Mac will offer the same functionality as its Windows counterpart, though it may be jazzed up a bit in aesthetics to fit in better in the Mac environment. Either way, set your clock for 1PM EST this Friday and get your Mac-Berry on.