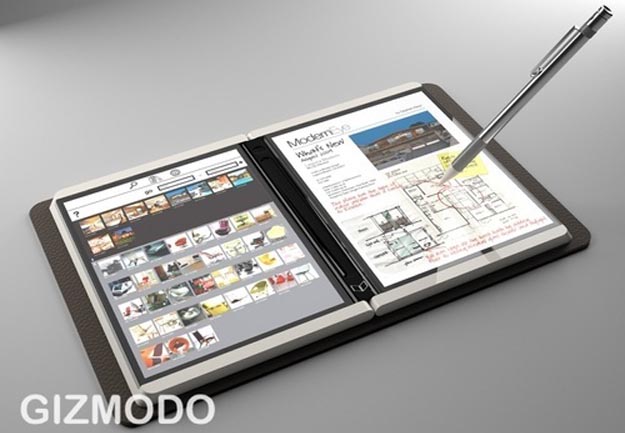 Many people, myself included, are very interested in what Apple has up its sleeve for the so-called iPad Tablet, but the boys and gals in Redmond have a few tricks up their sleeve too. We caught our first glimpse at the Courier Tablet a short while ago, but now we have a few more details surrounding the upcoming Microsoft product.

Microsoft has yet to confirm or deny the existence of this project, but all indications are pointing toward the very real release of a book-style tablet PC. This is quite different from the single tablets that we’ve seen from other companies and the proposed form factor for the Apple Mac Tablet.

Regarding the Microsoft Courier Tablet PC, we’re hearing that Windows 7 will be the operating system at its core, just like how Vista is at the core of the Microsoft Surface. We’re also hearing that Microsoft is producing the hardware as well, instead of relying on an OEM/ODM to produce the physical product on their behalf. This is in sharp contrast to the approach the company has taken with Windows Mobile.

It’s still possible that the hardware will be produced by someone else, but the branding will carry the Microsoft name like how they did with the Xbox 360 gaming system and Zune media player. Most sources are pointing toward a Microsoft branding scheme.

The current rumors are pointing toward a mid-2010 delivery of the Microsoft Courier, which is probably around the same time that Apple will be releasing its iPad Mac Tablet.