We all know that the iPod family, with the noted exception of the shuffle, is capable of playing video content. However, even when you step up to the bigger screen of an iPod touch or iPhone, the display still isn’t really big enough to enjoy longer movies and television shows. Enter the iLuv i1166 to address this very concern, especially for frequent travelers.

The iLuv i1166 isn’t completely groundbreaking in scope, since iLuv has already released similar products in the past, but this portable multimedia player is a great option for watching movies on the go. That’s because iLuv has stepped it up to a 9-inch widescreen digital TFT LCD display, making for a perfect size to watch videos on an airplane, bus, or car ride.

The i1166 will accept any contemporary iPod and the Apple device will actually be housed inside of the iLuv player, eliminating the need for messy cables and other attachments. The iPod will also charge up inside the i1166 if you have the player plugged in via the provided AC adapter.

In addition to iPod compatibility, the iLuv i1166 also has a spot for regular CDs and DVDs, including the data-only versions with DiVx video, MP3 files, and so on. Rounding out the specs are USB expansion, SD/MMC expansion, full subtitle management, and fast motion playback.

The iLuv i1166 portable digital multimedia player will ship in mid-October for $269.99. 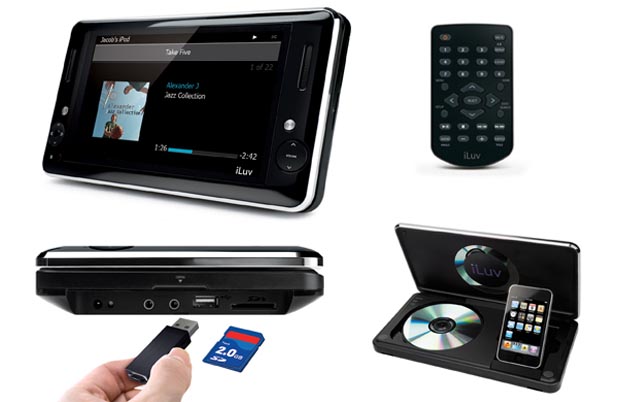