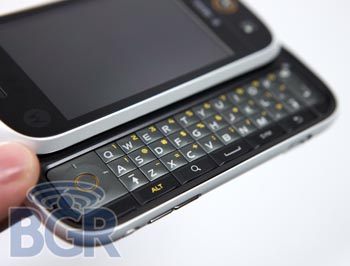 We all know that Motorola is nowhere near the dominating force in the cell phone industry as it has been in the past. There are so many other competitors these days, so it’s harder than ever for Moto to rise back to the top. The Motorola CLIQ is supposed to be one of the biggest new offerings in quite some time, but how does it stand up to scrutiny?

The Boy Genius Report was lucky enough to get a review unit, even if it may not be the final production version. While it’s not nearly as groundbreaking as the RAZR was in its day, the CLIQ is said to be a “decent phone with a great concept.” Unfortunately, the execution of this concept isn’t as good as it could have been.

Rather than appealing to business users and high-end consumers who are eyeing devices like the HTC Hero, the Motorola CLIQ could be more suitable to a “young teen market” that may have otherwise chosen something like the LG Voyager or T-Mobile Sidekick. That left-aligned d-pad could be great for gaming.

Going through the hands-on preview by BGR, we learn that this phone is kind of clunky and annoyingly slow at times, but the “connected lifestyle” concept is certainly attractive. It may not be a huge boon for Moto, but the Cliq could represent a quantum leap in the right direction for the StarTAC-maker.