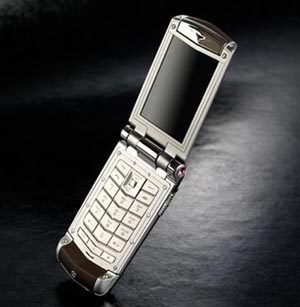 Some economists are saying that the financial world is on the upswing and we are officially out of the recession. That may or may not be true, but there are still quite a few people who are hurting in this economic climate. The new Vertu Constellation Ayxta clearly is not for those people. As with all other Vertu phones, you’re not paying for additional functions or features; you’re paying for class and prestige.

Unlike most other Vertu phones, however, the Constellation Ayxta is not a candybar. Instead, it takes on the familiar clamshell “flip phone” form factor, but that doesn’t mean that Vertu has cheaped out on the niceties. It’s just as “bling” as any other Vertu made by Nokia.

Depending on your preferred level of eye candy, you can expect to pay between 4,900 and 6,500 Euro. That’s between $7,193 and $9,543 US dollars based on today’s exchange rate. That new iPhone doesn’t sound all that expensive anymore, now does it…