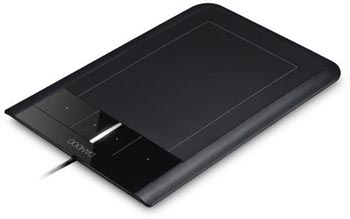 Graphic artists and website designers swear by their Wacom Bamboo tablets, since it’s so much easier to draw out logos and other pieces of digital art using a tablet than trying to do it with a conventional mouse. It makes a world of difference, but the problem is that most graphic tablets don’t do the multitouch thing. This means that you can’t take advantage of the gestures built into Mac OS X.

Well, Wacom is waking up and smelling the roses, because the new Bamboo Touch is fully compatible with the range of multitouch gestures you know and love. This multitouch trackpad measures 5.0 x 3.5 inches, giving you enough room to do two finger zooming and scrolling. It’s built for finger-based input, just like a regular trackpad and it retails for just $69.

If you prefer to use a pen for your artwork, the appropriately named Wacom Bamboo Pen (also $69) is more for you. The trackpad is the same size as the Bamboo Touch and it’s just as happy with multi-touch (as far as I can tell), though you’ll need two pens to do it. To get touch and pen, you’ll want the $99 Bamboo Pen and Touch (that makes sense).

For people who need a tablet with a larger trackpad surface, Wacom is also offering the $129 Bamboo Craft and $199 Bamboo Fun. They also come with more software and other goodies. All versions will work with Windows (including Win7) and Mac environments.