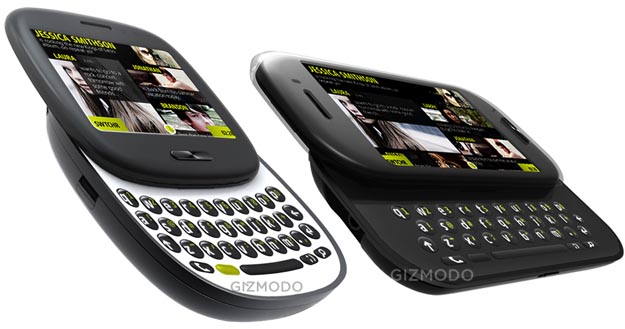 Ever since Microsoft decided to acquire Danger, we’ve wondered what they were planning on doing in the cell phone market. Rumors swirled around about some sort of crazy amalgamation that would comebine the Sidekick thing from Danger, Windows Mobile as the OS, and something to do with Zune for media. It was dubbed Microsoft Pink and now we could be seeing the first fruits of that labor.

Nothing official has come out of Redmond just yet, but it seems that the Pink project is starting to get a little more concrete. What you see here are the Motorola Pure and the motorola Turtle. From what we understand, both phones will actually be manufactured by Sharp, the same company that produced (most of) the Sidekick line.

With Project Pink finally bearing some fruit, we see the Motorola Turtle. That’s the phone that looks almost like the Motorola Hint QA10 or Palm Pre, featuring a vertically-sliding QWERTY keyboard and what looks like a square display. The cute rounded lines are clearly targeting a younger audience.

For something marginally more serious, we get the Motorola Pure. This has the QWERTY keyboard that slides out the side to work with a landscape oriented display, similar to what we got with the Sidekick Slide or any number of HTC smartphones.

The rumors are saying that Windows Mobile (maybe WM7) will be at the core of both these units, but Danger will provided some sort of special UI overlay (like HTC’s TouchFLO 3D or Samsung’s TouchWiz) and there could be some inclusion of Zune services, including a dedicated app store.

Nothing’s confirmed for now, but it looks like they’re trucking along with this project.