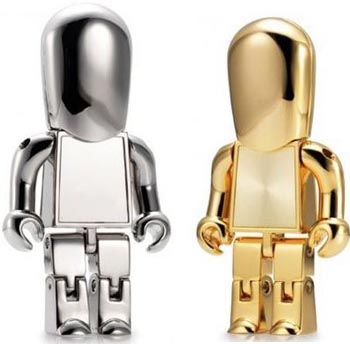 We’ve seen quite a few unique USB flash drives. Some are shaped like pieces of sushi. Some have been made to look like severed fingers. And who can forget about the USB humping dog that later gained some flash storage of its own. While I don’t expect this bot to do anything more than store a document or three, the USB Man has to be one of the more interesting drives we’ve seen in a while.

There is no official connection to Star Wars and George Lucas, but the resemblance between the gold version of the USB Man and C-3PO is utterly undeniable. Even his head is shaped roughly the same way. It’d be nice if he came bundled with an R2 unit, but I guess you’ll have to find his robotic companion elsewhere.

To make things even more interesting, the legs on the USB Men are fully bendable and posable, just like what you’d get with a Lego Minifig. That’s pretty cool. I think the arms can move too, though there’s no explicit mention of movement for the upper extremities.

Available in your choice of gold or silver, the 1GB USB Man does not come cheap. Find it thorugh the Gift Library UK retailer for a whopping 55 GBP. That works out to about $88. For that price, you can get a much larger albeit more generic-looking USB drive elsewhere.