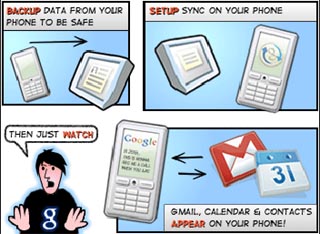 I’ve been using my Nokia E71 smartphone for several months now and I’m quite pleased with what this little phone can do. I’m also very happy to have found Google Sync, which allows me to synchronize the calendar and contacts on my phone with their equivalents through the Google suite of services. Well, that suite just got a little sweeter with the addition of Gmail Push.

You will still use the same Google Sync functionality as before, which you can find out more about through google.com/sync, but now they’ve extended beyond calendar and contacts to include push Gmail service. This is not only for my Symbian-based phone too, since they’re doing it for all the iPhone and Windows Mobile too.

In order to get Google Sync to work on your Symbian smartphone, you must first get Microsoft Exchange installed on your phone. It’s also notable that it will only work with a single account, so if you have one for personal and one for business, you’ll have to choose which is more important to you. For instance, Sync will only work with your personal Google Calendar and with any additional calendars you may create within Google Calendar.

Up until now, iPhone owners who were using the built-in Gmail functionality on their devices had to manually pull messages from the servers. With the introduction of push, you can get notified in real time when you receive a new email. This brings the iPhone (as well as WM and Symbian) up to par with the Palm Pre and Android in terms of Gmail Push service.

Yes, there have been some third-party workarounds that tried to provide similar functionality, but now you can get the real deal from Google if not from Apple.