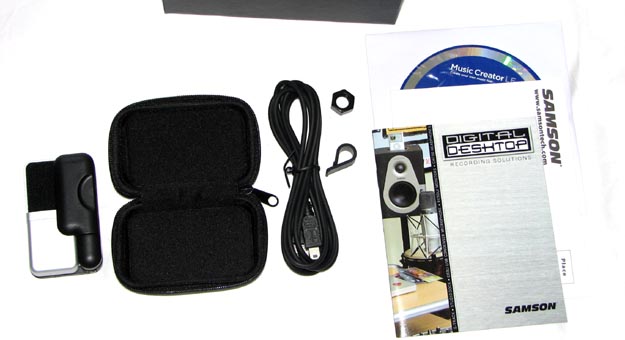 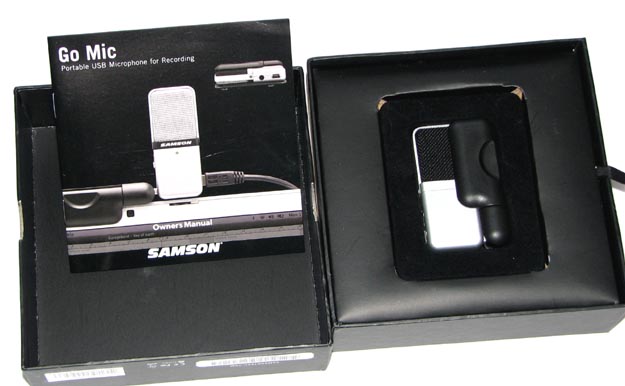 The vast majority of notebooks and netbooks being released into the marketplace today come equipped with integrated webcams and microphones, but these are obviously of a lower-quality when compared to premium standalone products. You could use the microphone that’s built into the portion above your display, but you’re probably going to pick up some wind noise and the resulting audio quality will be sub-par at best.

For people who want more professional sound, but need to stay mobile and keep things under a tighter budget, a viable option may be the Samson Go Mic. This portable USB condenser microphone is a lot smaller than the larger studio-quality microphones being produced by Samson, but they’ve included much of the same technology in the Go Mic that they put into the more expensive counterparts.

Quick Glance at the Features

The whole point of the Samson Go Mic is to give you that studio-like experience without having to lug around a giant microphone. It’s completely plug-and-play compatible with both PCs and Macs, since it can be used with generic USB drivers that your computer will auto-detect and install. It’s also very small, measuring about 7cm x 4cm x 2cm.

It has a spring-loaded clip and a built-in base, so the Samson Go Mic can easily attach to the top of a laptop or it can be placed on a desk for ease of use too. The adjustable stand lets you point the mic in just about any direction too. Other highlights include 3.5mm headphone output, 20Hz to 18KHz frequency response, and a resolution of 44.1kHz/16-bit.

Inside the box, you get the instructional manual, the Go Mic, a carrying cash, a USB cable, a couple of clips, Music Creator CD, and some other documentation. You don’t have to install the software unless you want to make use of the advanced functionality it offers.

Aside from its rather compact size, the Samson Go Mic is also quite impressive with the level of build quality and choice of materials that Samson decided to use here. It’s very well built and gives you a great sense of being a premium product.

There are professional-grade wind screens on both the front and back portion of the microphone, so you won’t have to worry about wind noise and other distortions when it comes to your sound recordings. The mini-USB port is easily accessed on the side and it’s right next to the 3.5mm headphone output jack. This way, you can hear what you’re recording without the sound being picked up by the mic itself. 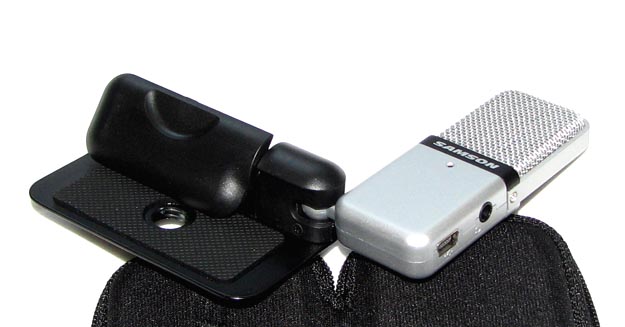 The articulation of the stand is also very nice, giving you a grippy surface on one side if you want to use it on a desk, but the robust spring-loaded clip can be used to attach to a notebook too. On the other side, not pictured, is a switch for swapping between some different audio recording modes. I’m not much of an audiophile, in this respect, so I don’t know exactly what these mean.

So, How Does It Sound?

In addition to regular audio recordings, the Samson Go Mic USB condenser microphone can also be great for recording podcasts, having VoIP conversations, and other similar kinds of applications.

To give it a proper test, I put together a short video of me making my lunch and then I superimposed the video with audio I recorded using the Go Mic. I placed the Go Mic on my desk, about 12 inches or so away from my face, and I spoke at a regular conversational volume. As you can tell in the embedded video, the audio is very clear and crisp.

For people who want something better than the integrated microphones on their computers, the Samson Go Mic is a very good option. It’s just as portable as carrying around a notebook mouse and you get much better audio that the little hole in your laptop lid. The windscreens are very effective and the resulting sound is clean and crisp.

The Samson Go Mic Portable USB Condenser Microphone is listed at about $80, but you can find it on sale online for about $50-$60 through a number of different retailers.