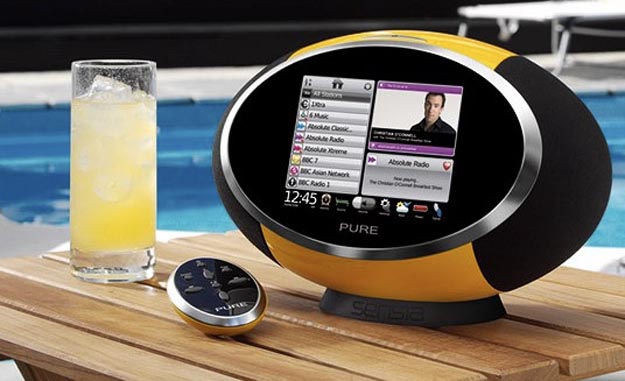 The days where you can just hang out next to the pool with your umbrella drink are probably numbered, unless you can find yourself in more tropical climes some time soon. Even so, the new Pure Sensia will certainly come in handy with or without the cabana boy there to bring you an iced beverage. This is so much more than just a regular old poolside radio.

The Pure Sensia will not only nab only to traditional FM radio airwaves to get the music pumping, but it will also take care of DAB and DAB+ radio, as well as Internet radio presumably through a Wi-Fi Internet connection. This thing also comes equipped with a large touchscreen display to navigate you through its different functions.

As if the musical enjoyment were not enough for you already, the touchscreen can also be used to access the built-in “widgets” for access to sites like Facebook and Twitter. You don’t need a smartphone or notebook to do that, you see.

Going further, it comes with a pair of built-in stereo speakers and a jack for audio output to something bigger if you prefer. Along with Facebook and Twitter, other “widgets” give access to Picasa, weather, news, and so on.

Do expect to spend a pretty penny on this Euro-sourced device, however, as the Pure Sensia is listed at 249 GBP. That works out to about $400 or so, which is more than ten times how much you’d probably spend on a cheap clock radio around these parts.