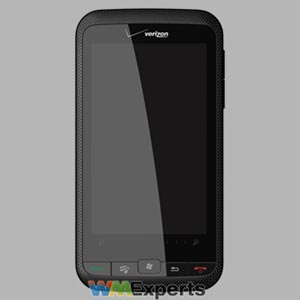 If you’re growing a littel weary with the number of Windows Mobile 6.1 phones on the market, next month could be a huge cause for celebration. Windows Mobile 6.5 is set to hit the stage at that time and one of the first handsets to officially tout the updated operating system is the HTC Imagio, a touchscreen smartphone on its way to Verizon Wireless.

Previously known by its Whitestone codename and even mistaken for the Touch Diamond2, the HTC Imagio is an all-new handset for Verizon Wireless that will get its juice from the newest Windows Mobile 6.5 stack. You get a large 3.6-inch WVGA touchscreen display, an adequate 528MHz Qualcomm processor, 512MB ROM, 256MB RAM, an autofocus 5-megapixel camera, and GPS.

In addition to the CDMA/EV-DO stuff to handle the Verizon network, the Imagio is actually a world phone with GSM connectivity too. This way, you can plunk in an international SIM card and go traveling through Europe and Asia while maintaining your emails and contact lists.

Moving a little further into the future, Verizon Wireless is also set to get its hands on another HTC-sourced handset in the same month. Closer to the end of October, you can expect to get the HTC Predator with Google Android. Details are slim on that handset, but it’s good to see some ‘droid love head to the red checkmark.