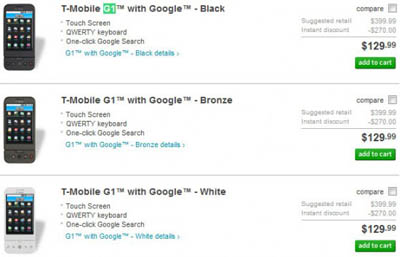 Considering that some new Google Android options have already hit the market and there are a few more that will soon be on the way, I guess it makes sense for T-Mobile to make the first Android phone a little more enticing for potential customers. T-Mo can’t do it with new features, so the T-Mobile G1 is getting a price slash instead.

And when I say price slash, I really mean a rather minor price reduction. Seeing how you can go through some third-party retailers to get a T-Mobile G1 on contract for as little as $99, this price reduction from T-Mobile itself doesn’t sound quite as appealing.

Instead of the regular $149.99 price tag attached to this phone up until now, the T-Mobile G1 can now be purchased for $129.99 with a qualifying service agreement. Personally, I think it makes more sense for you to shop on Amazon or Wirefly for a better deal.

Better yet, ditch the older handset and go for one of the new Android phones instead. You won’t be able to get an official HTC Hero through T-Mobile, but that new Motorola Cliq should be coming to T-Mo in the next couple of months.