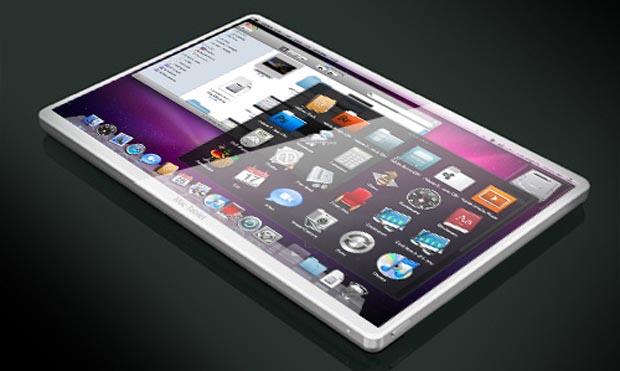 The team in Cupertino has neither confirmed nor denied the existence of a MacBook Touch, but we’re sure hearing a lot of rumors about a supposed Apple Mac Tablet of sorts. It seems to make sense for Apple to release what is effectively a giant iPod touch and this latest rumor places it right in the thick of the netbook market.

As far as we can gather, the “Apple iPad” won’t get a conventional keyboard like the Eee PC or MSI Wind, instead relying on a large touchscreen just like the iPhone and the iPod touch. With the new rumors, the Taiwan Economic News is saying that the upcoming Apple tablet will get a 9.6-inch “finger friendly” touchscreen from Wintek. This is consistent with the “big iPod touch” line of thinking.

The Taiwanese newspaper is also reporting that the yet-unnamed Apple device will have HSPA connectivity and a processor from PA Semi, a company that Apple owns. The battery comes from Dynex, which will be producing 300,000 battery packs each month for the device.

So, how much will it cost? We’ve believed all along that the Mac Tablet would slot between the iPod touch and the entry-level MacBook, so the most recent rumor of a $799 to $999 price range makes perfect sense. And the question of when? We’re currently looking at a February 2010 launch, so that could mean we’ll see an official reveal around the same time as CES and MacWorld in January.