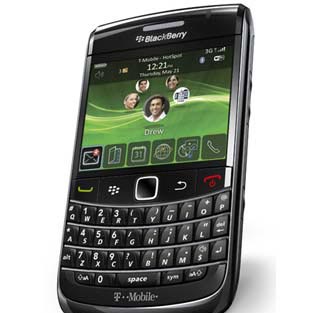 The original BlackBerry Bold 9000 represented the pinnacle of what Research in Motion could do with the BlackBerry platform. It was the most powerful handset of the bunch and it also happened to be one of the bulkier options. Sure, we got a touchscreen with the BlackBerry Storm, but the Bold is still arguably the better ‘Berry. Well, it’s about to get usurped.

It’s been almost a year since the BlackBerry 9000 Bold was released to the public, so it’s about time that RIM provided us with its successor. We’ve known about the BlackBerry 9700, a phone we once referred to as the Onyx, for several months already, but now we have a video walkthrough of the new device, including a side-by-side comparison with its predecessor.

The new BlackBerry Bold 9700 is smaller and sleeker than the original Bold 9000 in just about every way. The backside is much more conventional in appearance, departing from the all-leather back of the 9000 for a two-parter back like most other phones. The Bold 9700 has a smaller footprint, a thinner profile, and an overall better-looking appearance.

You’ll also notice that the trackball has been replaced with the new trackpad from RIM. Just as the transition from the scroll wheel to the trackball took some time, I’m sure people will take some time to get used to the new trackpad too. Expect the BlackBerry 9700 “New Bold” to launch through T-Mobile in the States and Rogers Wireless in Canada before the end of the year.