The outward appearance of the fifth-generation iPod nano remains largely unchanged from the fourth-generation nano that preceded it. You still get the shiny aluminum casing, the elongated body, and the white click wheel, but there are some obvious changes as well. The display is just slightly bigger and, more notably, there’s that new camera poking out the rear.

Dan Nosowitz of Gizmodo couldn’t help himself after the It’s Only Rock and Roll Event hosted by Apple earlier this week. During that event, Steve Jobs officially unveiled the iPod nano 5G, saying that the new MP3 player is on sale right away.

Going through Dan’s review, we learn that the screen goes from the 2.0-inches on the 4G nano to the 2.2-inches on the 5G nano. The resolution, as a result, gets a bump from 240×320 to 240×375. That’s not quite a 16:9 wide aspect ratio, but it is a widescreen nonetheless. The screen is also noticeably brighter and sharper than its predecessor. To make room for the bigger screen, the click wheel had to get a little smaller.

The embedded VGA camera will only do video (no stills), but it does come with a series of built-in effects and filters, including heat vision, tunnel vision, and security cam vision. The video quality is actually quite good, comparable to some of the standard-def pocket camcorders out there. It doesn’t do HD, but it does VGA at 30fps quite well. Just make sure your finger isn’t blocking the lens.

Other highlights include the new FM radio, a built-in speaker, pedometer, and a microphone with voice recorder. All in all, Dan says that the iPod nano 5G is a seriously good player and the inclusion of the “surprisingly good” camera is a huge bonus. That said, you have to realize that a 16GB nano is the same price as an 8GB iPod touch, so would you prefer to have a smaller form factor and a camera or would you want a touchscreen and the App Store? 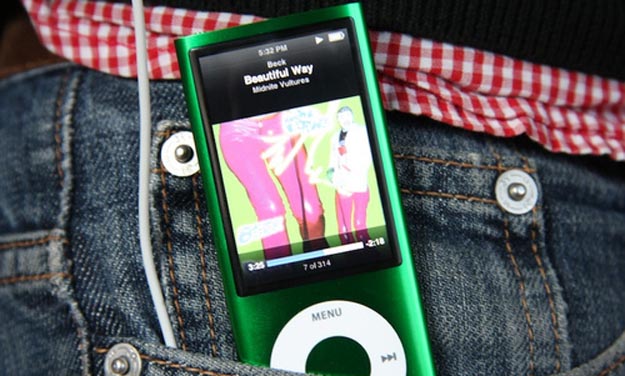