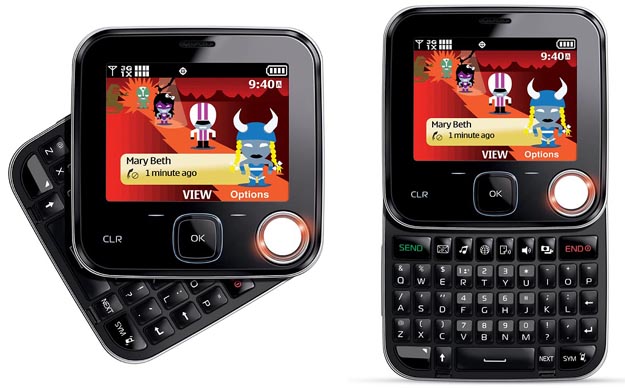 You may have spotted some of the strange patents that Nokia filed several months ago, going for a completely new form factor in the world of cell phones. One of those patents has now officially seen the light of day. Here is the new Nokia 7705 Twist, a cell phone that literally twists and shouts.

The spinning form factor is similar, I suppose, to some of those “switchblade” style phones that we have seen in the past, but the pivoting point is not in the center-top. It’s off to one corner. You’ll also notice that, in its closed form, the Nokia 7705 Twist is a square rather than a regular rectangular bar.

Spinning the phone reveals a full QWERTY keyboard for handling your text messaging and email sending requirements. This is no swiveling smartphone, but the QWERTY keyboard certainly comes in handy for texting fanatics. Other highlights include the 2.4″ QVGA screen, stereo Bluetooth, 2.5mm port, 3-megapixel camera, photo editing software, and integration with all sorts of Verizon services.

The Nokia 7705 Twist feature phone is set to launch through the Verizon Wireless website this coming Sunday. Expect to pay $99 with a two-year service agreement, assuming that you’re willing to deal with a $50 mail-in rebate. For in-store purchases, you’ll have to wait until September 21.