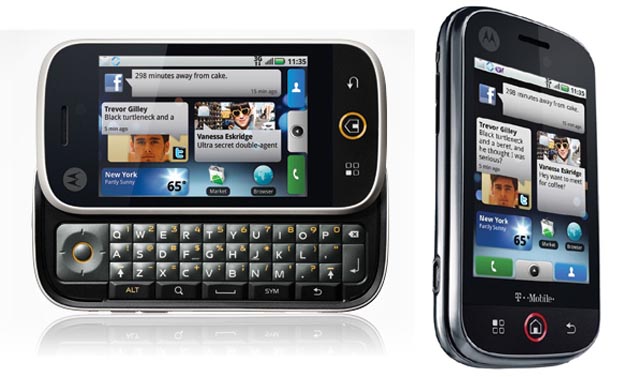 I think many of us would agree that Motorola hasn’t exactly had a big string of good luck lately. The company was able to cash in on the RAZR, but it hasn’t really enjoyed much success since then. That just might be turning around with the official unveiling of the all new Motorola Cliq. This represents the big M’s first foray into the world of Google Android.

The new Android smartphone was announced this morning as part of a big Motorola event, giving us the first official look at the new device. We’ve seen some leaked shots and some other codenames, but now it’s real and it’s very much in the primetime.

The Motorola Cliq comes powered by Google Android, as mentioned, but it gets a new user interface that Motorola that focuses on social networking. It’s called Motoblur and it’s supposed to give you quick access to things like Twitter and Facebook.

Other highlights include the 3G connectivity, slide-out QWERTY keyboard, 5 megapixel camera, customizable RSS news widgets, photosharing, a regular d-pad (for games), microSD expansion, and a 3.1-inch screen with a 320 x 480 pixel resolution. You also get 802.11b/g Wi-Fi and Bluetooth 2.0+EDR with A2DP.

Look for the Motorola Cliq Android smartphone to launch exclusively through T-Mobile at a price yet to be determined.