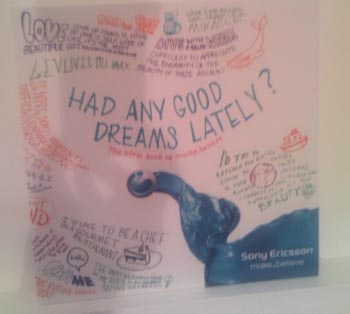 I’ve never heard about this tagline from Sony UK, but I guess that’s because it never really made its way over to North America. The “make. believe” slogan is apparently being expanded beyond just the Sony brand in the UK and into the realm of the Sony Ericsson mobile division. Because, you know, this is the stuff that dreams are made of.

I’m no marketing guru and I don’t claim to be an advertising expert, so I’m not entirely sure how I would react to that kind of company slogan. While the period in between the two words implies that Sony Ericsson is making something and then we can believe it, I’m more inclined to believe that we’re supposed to take what they have and pretend it’s something that it’s not.

This merging of the brands might be to create a more united front in the marketplace for all Sony products, so it’s very well possible that the “make. believe” tag line could get expanded into the PlayStation, Walkman, Cyber-shot, and other lines as well.

Can dreams come true? Sony Ericsson says it can make it happen.