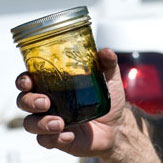 I was fortunate enough to stumble upon a demonstration by Renewable Oil International (ROI) of their biomass conversion machine. The ROI machine was unlike anything I had ever seen before. It took essentially what is biological waste, and converted it to three usable and valuable products. ROI then went a step further and mobilized the pyrolysis system for use in remote areas where extraction and relocation of the biomass may not be cost effective.

The technology behind the ROI machine is fast pyrolysis, this will fractionate wood and other types of biomass into Bio-Oil, Syngas and Char. The wood, biomass, or “feedstock” is first processed through a chipper. Next it is put in front of a dryer to bring its humidity down to 10% and then mechanically fed by a conveyor system into the reactor where it is heated to 1000F in an oxygen depleted environment. Here is where the fast pyrolysis process takes place. Fast pyrolysis is the rapid thermal decomposition of organic compounds.

The material sent to the reactor area comes into contact with steal shot, which is preheated to the temperature required for fast pyrolysis, upon contact fast pyrolysis will occur and three products will be formed. The machine can be started using many types of fuel, ROI used propane to start it, then Syngas takes over once the process has begun allowing it to be thermally energy self-sufficient. 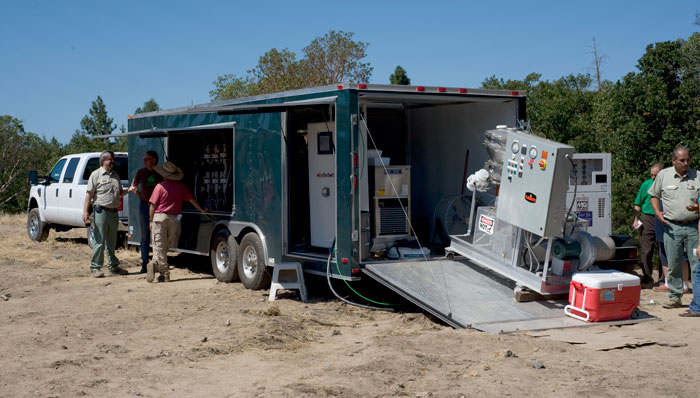 The gas and vapor are recovered from the top of the reactor where the vapor is condensed to form bio-oil and the gas is recovered and burned to provide thermal energy to the process. The char and thermal heat carrier are recovered from the reactor and then separated to allow the heat carrier to be recycled and the char to be cooled. Approximate yields of woody feedstocks are 60% bio-oil, 25% char and 15% syngas.

The ROI machine was brought in by Jim Archuleta, a Soil Scientist for the US Forest Service. Jim brought it in for several reasons, one of them was “to provide us potentially with an opportunity to reduce that fuel without open air burning, and to also gain that energy, and that potential soil amendment through the biochar.” The majority of biomass is currently being burnt in open air systems where much of that potential energy is lost, and where air quality is compromised. It also has to be trucked in to a recycling facility.

Check the video for a walk-through of the ROI machine by Joshua McGill, Chemical Engineer with ROI.

The Three Products Produced by the ROI Fast Pyrolysis Process

Bio-Oil is an alternative fossil fuel substitute derived from biomass material and can be used directly in space heaters, furnaces, boilers and selective turbines and reciprocating engines. Crude Bio-Oil has an energy density of 80,000 Btu/gal; much higher than raw biomass material. 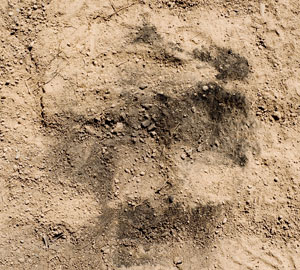 Char will exit by the augur in the rear of the machine and is used for soil amendment. Char is a finely ground, carbon rich, charcoal like material that can prevent leaching of nutrients from the soil, increase the available nutrients for plant growth, increase water retention, reduce the amount of fertilizer required, and provide a means of sequestering carbon. Char has an energy content of 12,000 Btu/lb.

Syngas is a combustible gas composed primarily of carbon monoxide, carbon dioxide, methane and hydrogen. The gas can be used to provide energy to the process and can possess up to 300 Btu/ft3.

I really appreciate technologies like this, something so simple that can make such a big difference. Using this type of machine for biodiesel production will reduce our dependence on foreign oil powers, and in the end, domestic our very own oil production.

For more on bio fuels keep an eye out for the upcoming release of Sundance film festival’s best documentary, Fuel, by Josh Tickel.