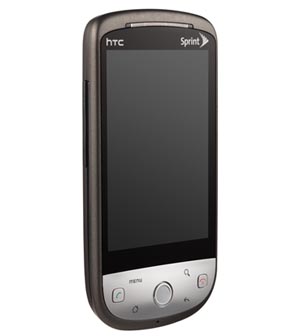 I’m not entirely sure why HTC insisted on putting that characteristic “chin” on all of its Android phones up until this point, but that trend is coming to an end with the HTC Hero Android Phone heading over to Sprint in the USA. That’s right. T-Mobile will no longer have the Android stranglehold in the United States.

You may already know about the HTC Hero through its European variant and how it’s supposed to be a substantial step forward for the whole Android world. It has great build quality, a nice design, and plenty of functionality. For the Sprint version, they’ve abandoned the chin to get a more streamlined appearance. And I think I like it.

The Sprint HTC Hero maintains much of the same features as its GSM cousin, loading up with the cool Sense user interface, smudge-resistant Teflon coating, and a 3.2″ touchscreen (320 x 480 pixels). Other features include the 5-megapixel camera, Qualcomm MSM7200A 528MHz processor, 512MB ROM, 288MB RAM, and microSD expansion.

In addiiton to Android and Sense, the Sprint-bound HTC Hero also gets something called Scenes. This lets you run different home screens for work, play, and other aspects of your life. Expect the Sprint HTC Hero to launch on October 11 for $179.99 on contract.