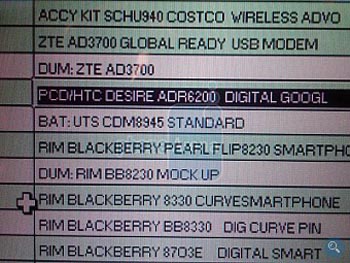 We knew that T-Mobile wouldn’t be the only American carrier to get a taste of Google Android, but now we’re getting a juicy tidbit of information that is pointing toward a new Android phone for big red. Verizon Wireless subscribers should listen up, because it sounds like the HTC Desire 6200 could be coming your way. You know you want it.

What you see here is a leaked shot from an internal Verizon computer and you’ll notice the mention of the HTC Desire 6200. The kicker is you’ll also see the mention of “ADR”, which could very well be shorthand for Android. Moreover, the line on the screen says “GOOGL,” further solidifying our suspicions.

According to the sources made available to PhoneArena, the HTC Desire 6200 will not carry the HTC branding like how we found with the HTC Dream and HTC Magic through Rogers Wireless. Instead, it will be branded as a Google phone through and through. If this is indeed the case, it means that it likely won’t get the HTC Sense UI.

For now, we have no more details on this particular phone, but I’m guess it’ll have a touchscreen, EVDO, camera, GPS, and plenty of Google integration. Whether it takes the physical keyboard route remains to be seen.