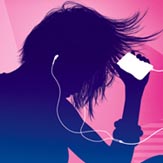 Even though no one from Cupertino came forward and told us officially, most of us already knew that Apple was brewing up a special event for early next month. Well, the official word has just gone out and we will indeed be seeing a special iPod event on September 9. This is Apple, so it’s an event and not “just” a press conference.

The promotional materials have already started to get distributed and you can see one of the images here with the now ubiquitous iPod silhouette. They’re telling us that they like to rock and roll all night, though there is no mention of partying every day.

For this iPod event, we are expecting to see the introduction of new iPod touch and iPod nano models, both of which will likely feature integrated cameras, increased capacities, and possibly some other upgrades. There will also be the revealing of a new iTunes 9 with social networking features, likely similar to what you get with Zune Social. iTunes 9 also gets Blu-ray support and visual organization of applications.

It’s possible that we may see a slightly upgraded iPhone firmware version 3.1 revealed as well, but we’re almost 100% certain that we will not be seeing the new MacBook Touch, iPad, or Mac Tablet (whatever you want to call it) at this event.

The Apple keynote is scheduled for 10AM (PST) at the Yerba Buena Center for the Arts in San Francisco.