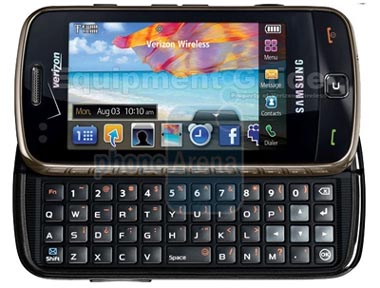 This isn’t exactly the same thing as getting your hands on an iPhone or an Android phone, but it does mean that you’ll soon be given at least a couple more options when it comes to slick handsets through Old Red. Word on the street is that the Samsung Rogue will be making its official debut on Verizon Wireless on September 8th.

The original report had the QWERTY-equipped handset launching some time this month, but that date apparently got bumped into next month for some reason. Also known as the Samsung U960, the Rogue gets GPS, EVDO, and a 3-megapixel camera, along with a touchscreen and slide-out keyboard. The estimated price is $370 sans contract.

If the Glyde-like Rogue isn’t your cup of tea, Verizon will apparently also be releasing another phone on September 8th. The Samsung Intensity U450, if I recall correctly, also gets a slide-out QWERTY keyboard, but it has a standard numeric keypad on the front face as well. It’ll have a 1.3 megapixel camera too.

Beyond these two handsets, you can also shoot your attention over to Sprint on the same date, because they’re getting the Touch Pro 2 on September 8th as well. That’s a lot of QWERTY to consider.