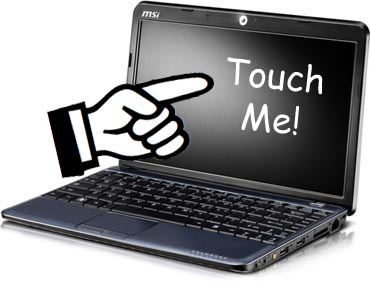 Gigabyte has the M912X Tablet PC. Asus has the Eee PC T91 mini-tablet. Where does MSI slot into this emerging market for netbooks with touchscreen displays? Wonder no longer, because MSI plans on releasing the MSI Wind U150 to tackle the convertible netbook world. That means it gets a rotating touchscreen.

But that’s not the only thing that will be setting the MSI Wind U150 apart from the competition. Intel is working on the next generation of Atom microprocessors and the new Intel Atom chipset is planned to be officially launched at the upcoming CES in Las Vegas. MSI wants to be among the first to use this new chip.

MSI hopes to be the first to market with a netbook that features the new Intel Pine Trail Atom platform and the touchy-feely MSI Wind U150 will be a part of that series. It gets a 10-inch display to go with improved graphics performance and (at least) 20% better power consumption. Oh, and it gets Windows 7 too, though the lack of multitouch means it won’t do the Touch Pack apps with Windows 7.

Before the Wind U150 hits the market, we should expect to see the MSI Wind U210. This takes on the AMD Yukon platform in lieu of Intel Atom. The $379 model gets Windows XP, 1GB of RAM, and a 160GB hard drive. The $429 version gets Vista Premium. Look for both to launch next month.