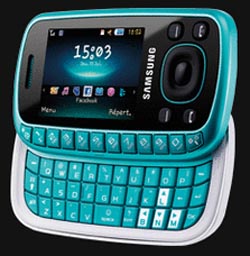 The Samsung B3310 may not look like aything particularly special, since it jumps into the same messaging phone niche that is getting popularized by tons of other handsets, but it does come with one very unique design cue. It does the slide-out QWERTY thing, but it’s also got a single-row numeric keypad too.

As you can see from the image provided, the QWERTY keyboard slides out of the side for when you want to fire out an email or text message. That’s pretty normal these days. The vertical numeric keypad is quite different, though, since you can access it in both portrait and landscape mode. It does make for an assymetical design though.

The rest of the specs are pretty mediocre at best. There is a QVGA display, 2 megapixel camera, Bluetooth 2.1, quad-band EDGE, and a microSD expansion slot. I’d imagine that it’ll hit the lower end of the pricing scale.

For now, no announcement has been made regarding carriers and release dates, but the assumption is that it’ll be a Euro-centric launch for the time being. The “last best guess” has the Samsung B3310 hitting retail shelves in the middle of next month.