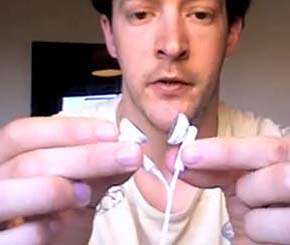 We’ve all faced this frustration at some point in our music-listening lives, but many of us have just assumed that it came with the territory. Not Lee Washington. He got tired of all the tangled cords from his iPod headphones and he has decided to do something about it. Interestingly enough, his idea is about as “fresh” as it gets, if you’ll pardon the bad pun.

Lee Washington is a product design student from London and he has come up with a solution that will effectively eliminate cord tangle when it comes to headphones. Rather than having two separate cords leading to each ear, these two cords can snap together not unlike what you get with a Ziploc bag.

In doing so, you get a single, unified cord when you have your headphones stowed away, making for absolutely zero tangles. When it’s time to pump up the jam again, you simply unzip the headphone cords, just as you would undo the seal offered by a Ziploc bag.

Washington says that he is considering a patent for the idea, but I’m thinking he won’t be able to use the “Ziploc” name as part of his patent or product. To see his idea in action, peep the embedded YouTube demo video below.